Numberless in short are the ways, and sometimes imperceptible, in which the affections colour and infect the understanding. (Francis Bacon, Novum Organon)

In the last couple of blog posts, I've looked at a drawing that John Coltrane made and gave to Yusef Lateef, which was then reproduced for Lateef's Repository of Scales and Melodic Patterns. In looking at the diagram, I've attempted to not interpret it, but just look at it and notice aspects of it; and from noticing features, come to some ideas about why Coltrane drew it and what it meant to him.

In the first post I suggested an order in which he drew the diagram. In the second, I talked about the idea of Lateef annotating the diagram, and briefly touched on its apparent recursive nature. I then created a three-dimensional representation of the diagram, and wondered if Coltrane saw the diagram as a static entity or not.

It's worth repeating [especially since I had a comment from someone that I had arrived at an "answer"] that I'm nowhere near any form of answer. In a sense, this is a very difficult task: Coltrane has been dead for almost 47 years, so we cannot ask him how he saw the diagram. To "have an answer" is to directly interpret the diagram from your own viewpoint: there's a chance that what you think is what John Coltrane thought, but there's every chance that it is not what he thought. I'm hoping that I've steered very clear of saying "this is what he meant".

Please bear in mind that I'm writing this early in the morning and haven't got all the books to hand—that's something for this week. I'm going to collect a bunch of things to read, with questions as well. There will be things I will have certainly missed, so if you know anything please chip in!

It's pretty well-documented that he had a spiritual experience around 1957, and that he felt that this experience empowered him to get off drugs, keep playing and create. Coltrane's thoughts on this are encapsulated in the liner notes of A Love Supreme: 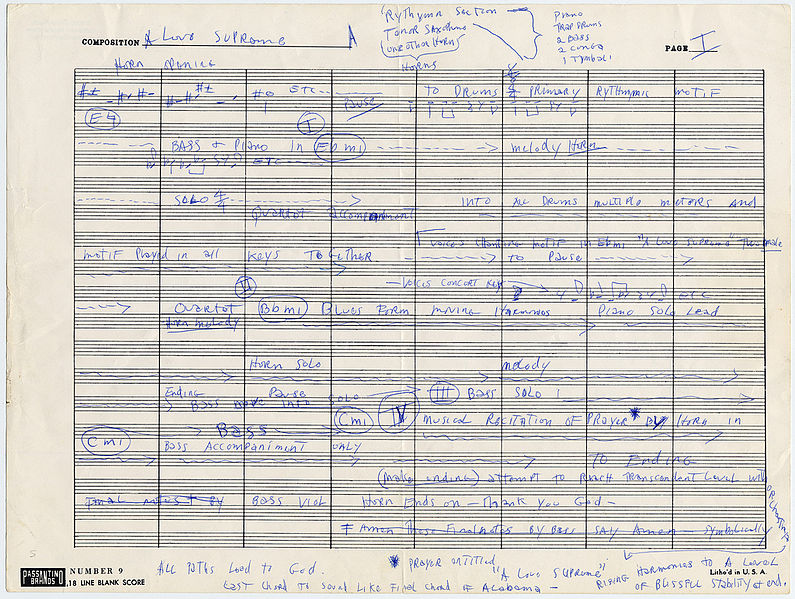 I experienced, by the grace of God, a spiritual awakening which was to lead me to a richer, fuller, more productive life. At that time, in gratitude, I humbly asked to be given the means and privilege to make others happy through music.

From that point (simplistically) he played with Monk; went back to Miles Davis; recorded Blue Train; then left Davis; did Giant Steps [and bits of Coltrane's Sound]; made more overt references to West and North Africa, and India through song titles and aesthetics; added Eric Dolphy; then formed The Classic Quartet; and on from there to more overt expressions of his spirituality through music.

We should consider that John Coltrane's interest in East Asian ideas of spirituality possibly started when he met Naima Grubb, who was Muslim when he met her in 1953. Marc Myers' fantastic JazzWax site gives more details. In the article, Myers reports that Eric Ninsenson's book mentions that Coltrane had a mistress since 1960. Was this mistress Alice Coltrane, or is the year just incorrect? Alice Coltrane herself says she didn't meet Coltrane until 1963, when she was playing with the vibist Terry Gibbs.

So—to what he may have learned. Just two things to share here: Coltrane always stated that he learned a lot from Thelonious Monk; and there's an interesting article from Jazz Times which highlights the relationship.

And a paper about Dennis Sandole, who taught Coltrane at various points, goes through the theories he may have imparted. Of interest to me here is the idea of multi-octave scales. As you may have guessed, I have thought about different ways of describing the minor third-perfect fourth movement found in Giant Steps other than the "three tonic" system. One way is to think about alterations of the whole tone scale as I mentioned before: but another way is one that I made a note of in April last year, where you combine the natural minor with the leading note's melodic major, for example C natural minor + B melodic major — c d e♭ f g a♭ b♭ b d♭' e♭' e' g♭' g' a' b'. Again, not a suggestion that Coltrane did this, but perhaps someone can spot something in the article that I did not?

And many thanks to @[Incite Out] for sharing the Francis Bacon quotation.

Here is the final part.